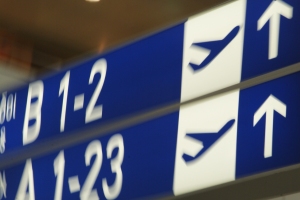 What Can I Do if My Flight is Canceled?

Q: In light of how the airlines are cutting back their schedules this fall, what can I do — and what recourse do I have — if my flight is canceled?

A: As airlines look to cut capacity, a lot are rescheduling passengers on other flights — but some aren’t advising passengers of the changes ahead of time, according to Anne Banas, executive editor of Smarter Travel.

But before you even get to the airport, there are several things you can do to prevent a potentially messy experience.

Banas recommends signing up for alerts through your airline or a booking Web site (such as Orbitz, Travelocity or Expedia) to keep you informed about your flight and any changes. These alerts, which can be directed to an e-mail address, cell phone or PDA, are especially important as your flight time approaches, Banas said.

If your flight is canceled for a reason within the airline’s control (read: not weather), Banas suggests being prepared with some information that can get you on another flight as soon as possible.

First, take a look at flights leaving around the time of your departing flight. It’ll save you time and effort at the airport if your flight gets canceled, and will give you a leg up when negotiating for a change to your ticket.

She also recommends printing out the airlines’ “Contract of Carriage” before you arrive at the airport. This contract will spell out what your rights are in the event of a canceled flight.

Although each airline has a slightly different contract of carriage, most airlines will rebook you on a flight within four hours of the original flight. If the airline can’t rebook you within that time,

you can ask for a hotel voucher. Food vouchers are also negotiable.

When you get word of that canceled flight, Banas recommends calling the airline right away. Standing in the customer service line with hundreds of other passengers will likely cause you more headaches and might not get you the speedy change you would like. Instead, Banas suggests doing both: Dial the airline on your cell phone while you’re standing in the customer service line.

While it is in the airline’s best interest to book you on another flight with them, as opposed to a competing carrier, you still can ask to be redirected on another carrier. Having the flight number, destination and time of similar flights will come in handy.

For a weather-related cancellation, the same procedure applies, with a little less flexibility in some cases.

Banas noted that recent cancellations because of Hurricane Gustav set a precedent that airlines are willing to rebook a flight for free if there is a weather-related delay. While most ticket change fees will be waived if travelers choose to take another flight, Banas said changes in destinations (flying into a neighboring city, for example) will likely result in a charge.

Also, changes to a ticket can be made only once in most cases, so be sure of your itinerary before making the switch to avoid extra fees.